CALENDERED WIRE CLOTH. Wire cloth that has passed through a pair of heavy rollers to reduce the thickness of the fabric, or to flatten the intersection to provide a smooth surface.

OPENING (Space). Clear opening between adjacent parallel wires; Not affected by diameter of the wire.

COUNT (also Mesh). Number of openings in a linear inch.

CRIMP. Corrugations in wires to permit locking them into place when perpendicular to each other.

DOUBLE CRIMP. Wire pre-crimped prior to weaving; Warp and shute wires lay in each crimp.

FILL WIRES (also Shute Wires). Wires running across the width of the cloth as woven.

INTERMEDIATE CRIMP. Warp and shute wires lay in every other crimp.

MESH. Number of openings in a linear inch measured from the center of one wire to a point 1" distant.

MICRONIC MESH. A woven filter cloth with a nominal micron rating as low as 2.0 with excellent flow characteristics.

OPEN AREA. The proportion of open space in a total screen area; Expressed as a percentage.

PLAIN WEAVE. Each warp wire and shute pass over one and under the next adjacent wire; Wires are crimped in the weaving operation.

RECTANGULAR OPENINGS. Long dimension of an opening can be specified as parallel or perpendicular to the length.

REVERSE DUTCH WEAVE. Woven in which the larger count of wires is found in the warp and the smaller count in the shute, thus reversing the method used in plain and twilled Dutch weaves.

SELVAGE. Finished edges running the length of the roll to prevent unraveling.

SHUTE WIRES. Wires running across the width of the cloth as woven.

SQUARE MESH. Wire cloth with mesh count the same in both directions.

TWILLED WEAVE. Each warp wire and each shute wire pass successively over two and under the next adjacent pair of wires.

TWILLED DUTCH WEAVE. Same as twilled Dutch except the shute wires are smaller and overlap, thus increasing the number of shute wires in a linear inch to provide greater density.

WARP WIRES. Wires running the length of the cloth as woven. 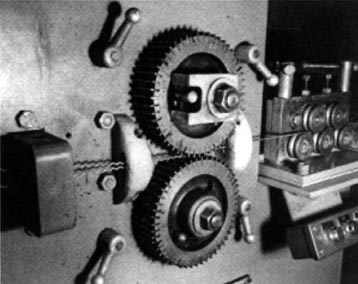